Join the ISUOG Basic Training course highlighting theoretical and practical aspects of ISUOG’s Basic Training program on Saturday 17 and Sunday 18 July 2021 and learn the essentials of obstetrical and gynecological ultrasound.

In addition to theory, this two-day course will pilot the remote teaching of scanning practice, thanks to the Volutracer® OPUS who are providing their simulators for this purpose. Our international experts will be live scanning and engaging in interactive panel discussions. Delegates registered for day 2 get the exclusive chance to join our remote classroom experience, which all our other delegates can also audit.

If you are new to ultrasound in obstetrics and gynecology or need to refresher, this course is perfect for you! Develop your knowledge and skill in ultrasound with our world-class experts.

Day 1 focuses on the theoretical and topics will include obtaining and interpreting heart views, the 6-step approach, distinguishing between normal and abnormal appearances of the skull and brain, the basic gynecology exam, and more detailed scanning of the ovaries and adnexae. Our experts will show you the benefits of performing live demonstrations using volumes and the OPUS simulators, illustrating that improving your scanning skill can be maintained remotely and in the absence of a patient.

*Important notes for day 2:
•    Only 20 simulators and 20 places are available!
•    To register for and join the hands-on training, you must be registered for day 1
•    Registration for day 2 is on a first-come-first-served basis
•    All delegates registered for day 1 who do not register for day 2 will be given access to observe the classroom training. There is no Q&A on this day.
•    Delegates outside of Belgium and the Netherlands who have an OPUS simulator or access to one and would like to join day 2, please email [email protected] and we will assess your ability to join the course.

Certificate
Attendees will receive a certificate of attendance after completing the course evaluation. The evaluation will be sent to attendees at the end of day 1 and day 2.

For your local time please use a time converter, e.g. https://www.worldtimebuddy.com/

***Delegates from Belgium and the Netherlands will receive a link to register for day 2 in their confirmation email from day 1. Registrations for day 2 will close at midnight BST of Wednesday 7th July. If you are registering from outside these countries or do not register for day 2, you will be given access to observe the hands-on classroom training on Sunday as part of your day 1 registration.

Or scan the QR code to register: 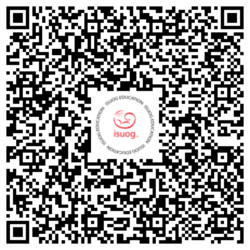 The recordings will be available to all live stream delegates for 1 month after the course for you to re-watch or catch up with any content. You will then be able to find the same or similar videos in our online education library.

ISUOG's mission is to disseminate the highest quality education to the broadest audience. To support this aim, we have ensured that trainees have discounted registration fees.

Proof of status: To qualify for this discount, all trainees will need to submit proof of their trainee status by way of a letter from their Department or Institution. The letter must be in English and dated within the last 3 months. The document can be uploaded at the time of registering, or sent by email to [email protected].

Trainee definition: A trainee is a medical professional who is not yet fully qualified or practicing without supervision within his or her chosen specialty and in accordance with the relevant national regulatory authorities.

After the course, we launched a challenge for the participants: The ISUOG Basic Training challenge on OPUS simulators.

We thank all the attendees who worked hard on all the simulation modules and made it a success. We are delighted to announce the winner of this challenge:

Congratulations to Dima Fadl Salloum for winning this challenge. She gets a free upgrade to her membership!

Dr Gihad E. Chalouhi  MD, PhD is an Obstetrics and Gynecology specialist. He worked for 8 years with Prof. Yves Ville Y and Prof. Laurent Salomon in Necker-Enfants Malades Hospital, Paris and is subspecialized in in prenatal diagnosis, fetal medicine, fetoscopy and fetal surgery with more than 300 performed fetoscopies. He is specialized in fetal imaging and obtained his PhD in fetal functional MRI in Paris Descartes University and INSERM unit U970. He is a member of the CNGOF (French National College of obstetrics and Gynecology), the LSOG (Lebanese Society of Obstetrics and Gynecology) and the CFEF (French College of Fetal Ultrasound).

He is a pioneer in the implementation of simulation in obstetrical and gynecological ultrasound education, and remains actively involved in this integration. He is an active member of ISUOG's Basic Training Task Force, and leader of the Simulation Work Group. For the last five years he has worked as part of ISUOG's Clinical Standards Committee for the establishment of ISUOG’s Guidelines.

He is the co-founder and President of SimECHOle, the school for ultrasound training and education using simulators in Paris, France.

Obstetrician and Gynaecologist from Universidad del Rosario (Bogotá – Colombia), Clinical Epidemiologist from Universidad del Rosario and Universidad CES, Sub-Specialist in Maternal Fetal Medicine from Universidad del Rosario and Diploma in Fetal Medicine and Fetal Surgery from the Fetal Medicine Foundation – Kings College Hospital (London – UK).
She has special interest in clinical research, teaching and coordination of projects in the area of fetal medicine and high-risk obstetrics. Lecturer in international conferences and seminars, faculty of the different certification courses in obstetric ultrasound and training courses in obstetric emergencies.
Coordinator of the Maternal Fetal Medicine Unit at Clinica del Prado, Medellin – Colombia. She works as Maternal Fetal Specialist and researcher at SURA and Universidad CES – Medellín - Colombia.
Member of the ISUOG Basic Training Task Force and Vice chair of the FIGO Preterm Birth Committee. She co-directs FUNDARED-MATERNA in Colombia a Foundation dedicated to capacity building and development of implementation research in Obstetrics, Gynecology and in Reproductive Health.
Country: Colombia

Dr S.Suresh is the Managing Director of Mediscan Systems a tertiary referral centre for Fetal Medicine in India. He is a Fellow of the Royal College of O&G London (honoriscausa) and is actively involved in training over 4000 physicians from India and other countries in Ultrasound and Fetal Medicine for over 35 years. He has several publications to his credit and is involved in various Research projects in Fetal Medicine. He has set up the Birth Defects Registry of India which is recognized as a subnational registry by the WHO. He is the managing Trustee of Fetal Care Research Foundation a Charity organisation that aims to provide access to treatment options for the underprivileged. He is a recipient of several awards and was one of the earliest to set up a Fetoscopic surgical service in India.

He is a visiting Prof in Perinatology at the Sri Ramachandra Medical University and the Chief functionary of the Voluntary Health Services, a charitable hospital in Chennai which aims to achieve affordable quality health care for all .

Basma graduated with an MD degree in 2005 from the Arabian Gulf University in Bahrain, she pursued a five year residency program in Obstetrics and Gynecology at Rouen University in France.

Her experience is in Obstetrics and Gynecology as well as ultrasound, with both national and international participations. She is currently the head of Saudi's National Obstetrics and Gynecology Residency Training Program, where she is in charge of supervising residents, mentoring them and participating in the development of the scientific and clinical program. She is also responsible for the Fetal Assessment Unit.

Prof. Jon Hyett trained in obstetrics and gynecology and sub-specialised in maternal and fetal medicine in the UK. He is currently Joint Head of the Discipline of Obstetrics, Gynaecology and Neonataology at the University of Sydney. He is involved nationally with the Nuchal Translucency Accreditation Program of RANZCR / RANZCOG and internationally with the obstetric ultrasound accreditation programs run by the Fetal Medicine Foundation, UK and ISUOG. Jon is also involved in the Scientific Committee, which oversees the production and development of the scientific program for the ISUOG World Congress.

Prof. Mauricio Herrera is an OB/GYN with a particular speciality in maternal fetal medicine, fetal cardiology and fetal neurology. Prof. Herrera began his work in MFM and prenatal diagnosis in 2000. In the same year, he created the Maternal Fetal Unit of Colsanitas Clinic in Bogota, Colombia. He is also responsible for begining the first recognised fellowship program in MFM at the University of Rosary School of Medicine in Colombia.

He is currently ISUOG's Ambassador to Colombia and Latin America at large.

"Through my ISUOG membership I have delivered 14 ISUOG Approved courses in Latin America, since 2006, attracting around 300 delegates to each course and taking great care to share with the quality educational opportunities that the Society provides. I was also pleased to organise ISUOG’s 9th International Symposium in Colombia, attracting 550 delegates from the regions and introducing them to ISUOG. Since then I have also contributed to translating ISUOG’s guidelines, helping to extend the reach of the Society into my region."