During a routine ultrasound investigation, the width of the posterior part (‘posterior horn’ or ‘atrium’) of the two lateral ventricles, situated on each side of the midline, is measured. These two parallel cavities are narrow anteriorly (towards the front of the body) and wider posteriorly (towards the back).  The posterior horn of the lateral ventricles is clearly visible at ultrasound examination as a roughly triangular black area (because it is filled with fluid) having inside a white lump of tissue called the “choroid plexus” (in red in the first picture above). This is a lump of tiny vessels that produce the cerebro-spinal fluid. The width of the atrium of the lateral ventricles is normal up to 10 mm. 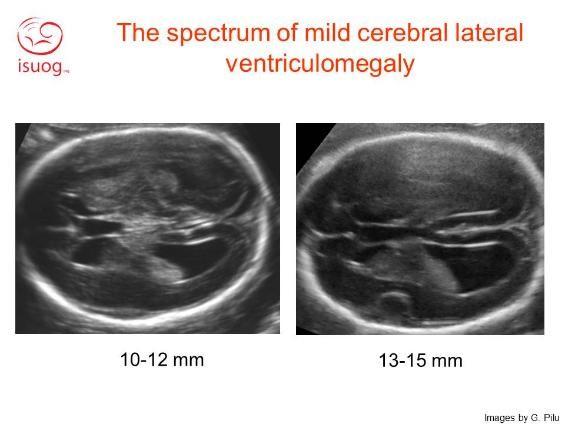 A width of 10-15 mm is called ventriculomegaly. Up to 12 mm we call it “mild” ventriculomegaly. If the posterior horn (atrium) measures more than 15 mm, it is known as hydrocephaly. It is not uncommon for lateral ventricles to be slightly larger in boys. Ventriculomegaly occurs in about 1% of fetuses.

How does ventriculomegaly happen?

There are a number of abnormal situations that can cause a blockage of the circulation of the cerebro-spinal fluid.  A thin communication between the third and fourth ventricle, called the aqueduct, can become obstructed, leading to fluid accumulating above it and causing dilatation (widening) of the lateral ventricles. This is visible on ultrasound as enlarged fluid filled (black) spaces above the level of the obstruction.

Common causes of ventriculomegaly/hydrocephaly are:

-Bleeding in the brain

Should I have more tests done?

When the doctor or sonographer measures the lateral ventricles to be more than 10 mm wide, you will likely be offered a number of additional investigations:

If all of these investigations are negative, your fetus is said to have an “isolated” ventriculomegaly.

The doctor will continue to follow your fetus with additional ultrasound scans to see whether the enlargement of the lateral ventricles remains stable, increases or decreases.

What does it mean for my baby after it is born?

It is difficult to provide parents reliable figures regarding the chance of a neurological problem after birth in a baby diagnosed with ventriculomegaly during pregnancy.  Although there are still insufficient data, the existing publications in the medical literature indicate that the risk of a neurological impairment is not higher than 10% when the ventriculomegaly is mild and isolated.  This is about the same as the rest of the population.

If the ventricles have not increased in size during pregnancy and if no other explanations for the mild enlargement have been found, there is no specific indication for further investigations of the baby after birth. You or your doctor may however want to discuss this further.

Click here to read the Patient Information leaflet on Ventriculomegaly in Chinese.